. . . or more accurately, failing at minimal standards of good behavior, but more on that later. Wifi was increasingly terrible on the boat, so although we’re already back in La Rochelle, I’m just now catching up. Here’s a bit more about life on the river.

Down the Charente from Cognac is Saintes, a very pretty, small city with lots of things to see, like a Gallo-Roman amphithéâtre built between 40 and 50 A.D. Seriously impressive . . .

. . . and the crypt of Église Saint-Eutrope, a stop on one route of the Chemin de Sainte-Jacques-de-Compostelle:

Also the Arc de Germanicus, right next to the river in the middle of town . . .

. . . and the Musée Archéologique, next to it and gratuit (free), so you can just wander in if you feel like it and look at stoned carved around the time Jesus was walking around. For an American, where old things are maybe 300 years old, it was almost surreal.

Saintes also may have the most creative, comfortable public seating of ANY city ANYWHERE. The grass looked so real on these “lawn” chairs, I had to touch it to be sure it was astroturf. 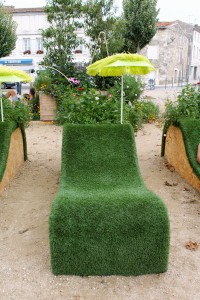 With all these things, you’d think I would have loved being in Saintes, but no. Because for me Saintes was all about failure. Remember my rant about the rude boater? Well, I became the rude boater. Yikes. Poor David. The first problem was we had trouble finding a decent mooring, finally settling on an ancient slanted stone wall that had a couple of bollards to tie up to and a stone stairway to access the walk above. Sounds like no problem, but remember we’re rank amateurs.

Mooring the boat turned out to involve approaching through tree branches that divested us of a chair and chair cushion (into the river), and the stairs were just far enough back that David had to jump for them and scramble up to try to catch the bow line from me, to keep us from hitting the boat moored in front of us (while I screeched panicked instructions and argued with him about what to do when). Then my throw missed him, while the current took the boat too far out to reach him at all, so I had to circle around and try to get back to David–my very FIRST mooring attempt ever, since David had done the others. I’ll spare you the rest of the gory details. Long story short, the chair and cushion were recovered. Our good mood was not. And there were a few more crises that I won’t drone on about now.

So today’s theme is failure. Yippee. Embarrassing, irritating, humiliating. These are words I tend to associate with failure. But you know what? We learned the most every time we failed. And you get to fail A LOT when someone hands you the keys to a thirty-four-foot boat after twenty minutes of cursory instruction, especially when locks, currents and other boats are involved. Here’s another way of looking at it:

But the most important thing we learned through these failures is that loving another person, or even being kind to that person, should not depend on performance or how well some possession is protected (even if it’s expensive, or new, or your favorite).

What I regret most in my life are failures of kindness. ∼George Saunders

I’ve had plenty of those, and I do regret them. So I wish for you–and for me–more kindness, given and received, more tolerance for falling short of perfection, and more of the grace of God, really, especially when under pressure. I hope it flows in and fills us to overflowing, so everyone we encounter is graced by it.

A single act of kindness throws out roots in all directions, and the roots spring up and make new trees. The greatest work that kindness does to others is that it makes them kind themselves. ∼Amelia Earhart

One thought on “Failing at Sainthood in Saintes”