After our boomerang start, we are now finally settled in the condo in the Folly Beach area of Charleston, SC. Remember when I said here we’d have easier access to higher ground? Well, I had forgotten that this area is called the Low Country. There’s a reason. It’s just as low and flat as the Outer Banks. Dry so far, though, unless you count the humidity that requires using the windshield defogger ten times during every twenty minute drive.

Wednesday evening, we drove out to the actual beach of Folly Beach, just as the sun was setting through the fog: 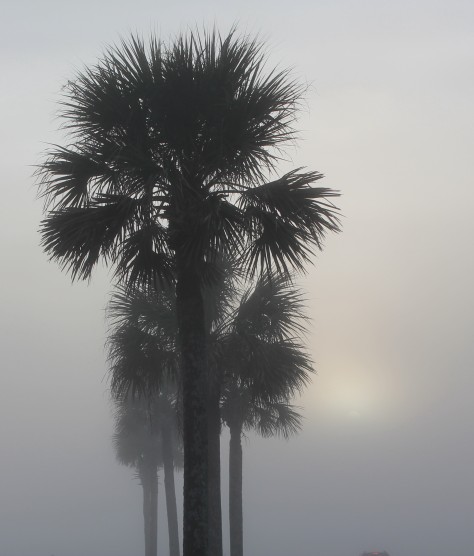 Very cool and kind of surreal. The state park at the southwest end closes at 5, at least at this time of year, and we didn’t get there until about 4:45, but the ranger we encountered on our walk said he was leaving the exit gate open since he couldn’t find everyone in the fog. The whole thing seemed sort of Twilight Zone, but bonus, we got to stay a bit longer.

We LOVE Folly Beach for walking. It’s flat, wide, firm and practically deserted. We saw lots of interesting shells, and a surprisingly large number of sea stars–maybe thirty or forty–stranded by low tide and either playing dead very convincingly or actually dead. I know many sea stars live in the intertidal zone, presumably on purpose, so they must have figured the whole high tide / low tide thing out, but I’m not sure the plan was working that day.

At the other end of the island the surfers were out in full force . . .

. . . um REALLY? It’s DECEMBER, and this is NOT Hawaii. There were probably thirty surfers practically within arms reach of each other, granted, all in wetsuits. One young guy returned to the car in front of where ours was parked on the side of the road and was trying to strip out of his wetsuit and apparently change into something else, inside a smallish towel he had wrapped around his waist, just as I was obliviously brandishing my camera around. Awkward. I snapped a few quick blurry shots of the surfers IN the water and we got in the car and left, tout de suite!

Later, after wandering around tiny, quirky “downtown” Folly Beach, we stopped in here . . .

. . . because, really, how often do you find a place like this? It just seemed to go with the weird vibe of the evening. While there, we were surprised to hear the bartender–a young, white woman– mention that she’d be singing with a gospel choir at a Christmas concert Saturday night. We overheard enough to find tickets online to what turned out to be the Charleston Symphony Orchestra’s Gospel Christmas concert, last night at a nearby large Baptist church. Surprisingly, the first half was classical and choral, but they put on the robes after intermission and the swaying and clapping we’d been expecting finally started. The whole thing was impressive, but we liked that part best.

Also unexpected, not to mention disturbing, to see this next to the condo parking lot . . .

Yikes. Yet more evidence we’re not in Colorado at the moment.

Speaking of the condo, the complex is nice and seems to be pretty new, and it’s very posh inside, as well as being conveniently located to both the casual, surfer-hip Folly Beach and classy, historic downtown Charleston (next post, I promise), but I’m not too sure about at least one of the neighbors. On two separate nights around 1 a.m. there has been crazy loud crashing and thumping, I think in the condo above us, as if the furniture were being thrown around or knocked over. No yelling last night, and it only lasted two or three minutes, but the first time this happened there was also a guy doing a lot of shouting, and then someone stepped out of the condo across from us and yelled up toward the thumper-shouter. Yikes. I really expected the cops to show up. But five minutes later, all was quiet again. Weird.

So . . . things are . . . um . . . different here (although I really should have expected the Low Country to be, you know, low). But what’s an adventure without new experiences? And this does continue to be a most excellent adventure, that’s for sure.

Hope you’re having a wonderful holiday season, and that your surprises are all of the very best kind.

And on this anniversary of the attack on Pearl Harbor, above all I wish you peace. Many thanks to those who have sacrificed for our freedom.