Beautiful as the setting sun can be, we let it set on St. Pete Beach without us on Friday and checked out a day early from the dismal condo we’d rented. No regrets, as this plan had the added bonus of shortening our drive on Saturday. We spent Friday night in Crystal River . . . . ↓

. . . on our way to the Aqua Condominiums in Panama City Beach.      Saturday’s drive was long, but there wasn’t much traffic for most of the way along the Big Bend Scenic Byway Coastal Trail.

We passed places with names like Apalachicola and Ochlockonee Bay, and carefully drove by Tate’s Hell State Forest–must be a reason for that name. We finally  found EVERYBODY AND THEIR MOM in Panama City Beach, apparently all in their cars . . .

. . . since it was nearly impossible to even make a left turn. Be sure to note the Longhorn Steer car.

The beach, on the other hand, is not really that crowded. 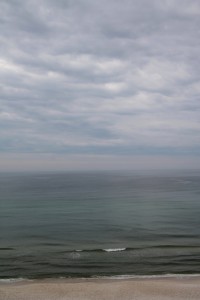 Really reminds me we’re on the road home.  The compass in the car says N, or W or NW nearly all the time now, and in a few days we head inland for good.

. . . but we can still enjoy the shimmering afternoon light on the sea and I’m hoping for a few more spectacular sunsets. 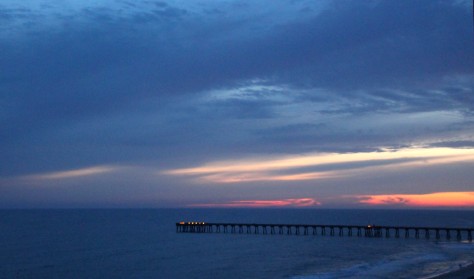 There’s something about the vastness of the sea and sky together that is both humbling and soothing. I’ll miss these views and colors, but I am beginning to long for home. Until then, I’ll soak it all in this week and share the best of it with you.

I could never stay long enough on the shore; the tang of the untainted, fresh, and free sea air was like a cool, quieting thought. ∼Helen Keller

The sea, once it casts its spell, holds one in its net of wonder forever. ∼Jacques Yves Cousteau

The mountains are calling, but the sea hasn’t seen the last of us!

4 thoughts on “On the Way to Aqua”