Things are not exactly looking up yet, but I’m doing . . . okay. Sometimes terrible, but often okay. I’ve benefited from some good advice from a number of quarters, including one acquaintance who has become a friend in recent days. Christine writes a beautiful blog called My Literary Playground relating how various things she’s reading impact her as she processes her own grief. Definitely check it out here.

I too have been doing a lot of writing lately, mostly journaling and writing letters to David, which may sound weird, but you’d be stunned at how many bereaved recommend it, and it actually really helps. It was a suggestion both in my grief support groups and in the wonderful book On Grief and Grieving by Elisabeth Kübler-Ross and David Kessler.

Then I jumped at the chance to enroll in a writers workshop offered in Denver free of charge for cancer patients and their caregivers by Lighthouse Writers in conjunction with UC Health. I’ve only had one session so far, but loved it, so we’ll see how that goes. While awaiting the beginning of the workshop,  I started reading Your Life as Story by Tristine Rainer, in which the author mentions a sort of parlor game. One of her friends said he’d heard that your favorite fairy tale or children’s story turns out to be the key to who you are. An oversimplification, of course, but I was intrigued by the concept.

I have a lot of favorites, but it would be hard to beat The Giving Tree by Shel Silverstein, about a tree that keeps finding new ways to give more and more throughout its  entire lifespan and the boy, later man, who benefits from the giving. If you’re not familiar with it, you’re long overdue. It was originally published in 1964 and remains a classic of children’s literature. 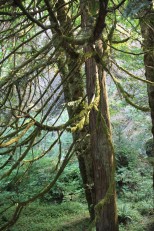 When I think about the story, though, and how it might relate to my life, I think it would be much more accurate to say David was the giver and I was the demanding little boy a LOT of the time. If not exactly demanding, I certainly knew expressing a wish in David’s hearing was a pretty sure way of having it granted. Ironic and beautiful, really, that his final gift to me was allowing me to give to him.

For it is in giving that we receive. ∼ Francis of Assisi

2 thoughts on “The Giving Tree”