Oh, là, là, là, là. Humblest apologies for all the weird errors in the last post! I was trying to finish it late Thursday night because we were heading out the next morning for a new adventure, but I ran out of time before I could proofread adequately. Yikes. I think I’ve caught everything now, but of course everyone who is interested has already read it. Eh, bien.  So on to the next . . . .

Friday morning Pascale and Jacky picked us up for a return to Île de Ré, the beautiful island just off La Rochelle, from the west end of which I took the beach photo that appears sometimes at the top of my blog. You get there by way of a long, swooping bridge. We decided against un pique-nique this time, since the weather was iffy, but the sun happened to appear just as we reached this spot. Pascale has been sharing her photos with me, so I’m not always sure who took which shots. I’ll try to give credit where credit is due, but certainly, if I’m in the shot, Pascale took it (sometimes Jacky).

Friday’s weather was a bit changeable, sprinkling a bit one minute and sun breaking through the next, but it made for some beautiful light conditions. 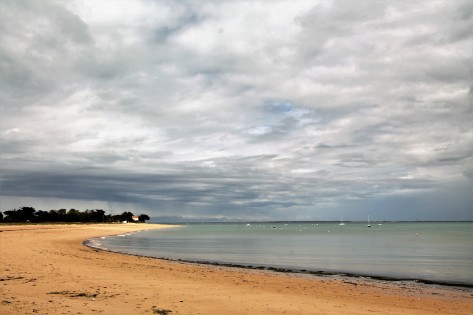 . . . and strolled a bit while Pascale went to find us a good restaurant for lunch.

Late in the afternoon we stopped by some friends of Pascale’s and Jacky’s to see their amazing garden, an excellent mix of serious gardening and whimsy.

Deep in the back of the garden, almost to the end, there is a long table under a tent-like shelter, and on the wall of one of the short ends, there are shelves with all sorts of aperitifs and other mysterious concoctions. We were ushered in with the warmest of welcomes and offered some home-infused absinthe. Daniel buys the eau de vie from a friend who distills it, then infuses the eau de vie with a plant from his garden for at least a year. The one we tasted was two years old with the plant still inside. Here’s how it’s served . . . ↓ 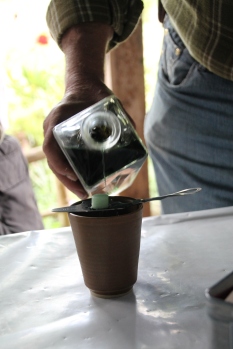 I was hesitant, but was eventually convinced to try it, and here is my response . . . ↓ 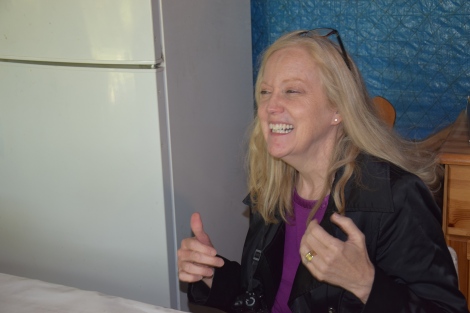 So THAT was an adventure!

David later asked Jacky and Pascale (well actually asked me to ask them, but you know what I mean) why all their friends were so warm, generous, and welcoming. How could they ALL be so great?  Pascale’s reply, “On ne garde que les bons!”  (“We only keep the good ones!”)

There are no strangers here; only friends you haven’t yet met. ∼William Butler Yeats

Wishing you a warm welcome and new friends wherever you go!